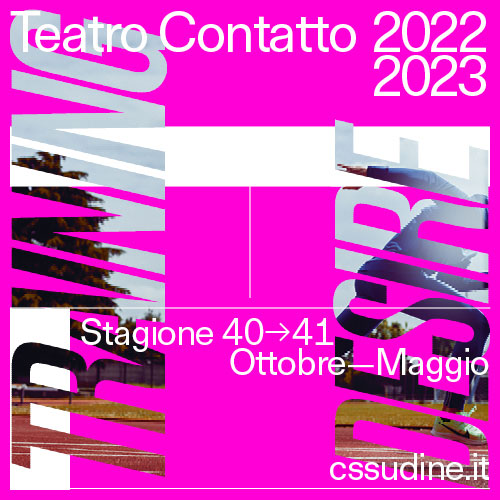 CSS, Udine was founded in 1978 and in 1984 it was awarded recognition by the Ministry of Culture. In January 2000 it became the Teatro stabile di innovazione del Friuli Venezia Giulia, a cultural and occupational cooperative of significant importance.  It has a total of 20 working members and employees.  An additional team of over 200 people comprising actors, directors, stage designers, costume designers, contracted artists and technicians joins the company at every season.  CSS's work is funded by the Italian Ministry of Culture, the Regional Council of Friuli Venezia Giulia, the Provincial Council of Udine (until 17/12/2014), Udine City Council and Fondazione Friuli. Its activities take place at a regional, national and for some projects, at an international level through a variety of house productions, venue programming, theatre training and through hosting visiting productions.

Teatro Contatto doesn't simply hosts visiting companies and artists but it also sets up and realises themed projects, the most recent one being Harold Pinter's Living Things. In 2009, a year after his death, the company paid tribute to the great English writer and dramatist, Nobel prize for literature, with productions, performances and relevant in-depth events.  Other projects include Pier Paolo Pasolini's Un viaggio lungo un anno / A year-long journey in 1995 and  in the 80s the themed season “Contatto Beckett”, and in 2015 Viva Pasolini! Project.

TIG - THEATRE FOR THE NEW GENERATIONS

Another activity CSS has been running by since 1997 is TIG season of work for the new generations.  It consists of matinées specifically targeted at nurseries, primary, middle and secondary schools and involves nine municipalities, located in the southern part of the region and  the province of Udine. It is realised in collaboration with the Ministry of Education, University and Research through the Regional Educational Authority of Friuli Venezia Giulia.  Every year thousands of students and their teachers experience theatre in various venues in Udine and at the Teatro Pasolini in Cervignano and they are also offered performances and theatre readings in their classrooms.  Since 2004 the project Didattica della visione has become an important activity of TIG Theatre season. It consists of a series of preparatory and in-depth meetings aimed at those teachers who wish to bring theatre into their classrooms.

As well as managing the TIG's season of work, CSS takes part in the running of the  theatre Teatro Pasolini in Cervignano, which re-opened 1997.  In 2003 the cultural association Associazione Culturale Teatro Pasolini was set up as a partnership between CSS Teatro stabile di innovazione del FVG for the artistic and organisational side (responsible for the theatre and dance season and TIG Teatro's workshops for the new generations),  the Associazione Euritmica (responsible for the music season) and the Cooperativa Bonawentura (as curators of the film programme).  The Chair of the Associazione Culturale Teatro Pasolini is the Municipality of Cervignano del Friuli together with the Department of Culture. The whole project is financially supported by the Region of Friuli Venezia Giulia, the Municipality of Cervignano and Fondazione Friuli.

Since the opening of the theatre Teatro Nuovo Giovanni da Udine in 1997, CSS has actively contributed to the setting up of a cultural project for the venue and continued to do so until the 1999/2000 season. In the first three year-period CSS was responsible for the artistic directorship of, and for programming, the theatre and dance seasons.  In the following years and up to now, the synergy between the Teatro Nuovo and CSS has continued through a number of co-productions and supports: Copenhagen by Michael Frayn with Umberto Orsini, Massimo Popolizio e Giuliana Lojodice in 1999, Polygraphe by Robert Lepage with Giorgio Pasotti, Stefania Rocca in 2000, Bigatis - storie di donne friulane in filanda / Spinners–Stories of Friulian Women in the Spinning Mill in 2000 and the most recent productions of Il vecchio il cielo / The Old Man and the Sky in 2010 and Il principe di Homburg / The Prince of Homburg in 2011, both directed by Cesare Lievi, as well as new projects like Udine a theatre-city for children and Farie Teatrâl Furlane.

THEATER PRODUCTIONS FOR CHILDHOOD AND YOUTH

From its outset, CSS has paid special attention to the production, support and artistic development of theatre companies in the region of Friuli (for instance, Teatro Incerto) which have produced work strongly linked to Friulian history and culture.
In 2011 CSS contributed to the setting up of Farie Teatrâl Furlane, a project aimed at promoting the regeneration and stability of the Friulian language and culture, through supporting the writing of new plays and the production of work with the involvement of professional artists from the Region of Friuli Venezia Giulia.
During the period 2011-2013 a large number of groups, within the Region's theatrical and cultural scene, will take part in Farie. They are: Accademia d’Arte Drammatica Nico Pepe, CSS, ERT Ente Regionale Teatrale, Fondazione Teatro Nuovo Giovanni da Udine, Associazione Mittelfest, Teatro Club Udine and the University of Udine, Società Filologica Friulana e ATF Associazione Teatrale Friulana. Each partner will contribute with their own skills and vocations. The project has the financial support of the Provincial Council of Udine, ARLeF, Fondazione CRUP and Udine City Council.

CSS's work has expanded throughout its territory also in areas concerning youth deviance and crime by promoting a pilot project with a social and cultural programme and developed within the detention centres of the Region of Friuli Venezia Giulia. The pilot project was first run in Udine for 6 years. Since 1995 it has been carried out at a regional level gradually involving other regional centres: Trieste in 1992, Tolmezzo in 1993, Gorizia in 1994 and finally Pordenone.
CSS currently runs a number of social-cultural initiatives and outreach projects within all the above detention centres. During its twenty years of activity, CSS has been able to guarantee a constant presence of artists, experts and practitioners within the three prisons, who carry out workshops around several creative genres. At the same time, it continues to offer to prisoners theatre performances, concerts and lessons-concerts. From 2012, the Project will expand to include activities aimed at tackling social issues effecting minors, working closely with the Social Services office for Minors of Triest.

For fifteen years CSS has been organising and running La meglio gioventù, a youth group and theatre workshop offering basic theatrical training and jointly run with several parish councils in the southern districts of the Region. The workshops are targeted at young people aged between 11 and 15, and aged between 16 to 29 led by Manuel Buttus and Nicoletta Oscuro, professional actors and directors of the theatre company Teatrino del Rifo.  The workshops offer a unique opportunity to learn about theatre and its basic language, share experiences, exchange opinions, interests, thoughts and ideas with other young people of the same age.

The geographical proximity of Italy to the Balkans has always given rise to a particular attention being paid towards the cultural and social realities of that territory. This has gradually led to setting up a project named Adriatic Project, with the aim of developing a mutual knowledge between those countries on the Adriatic sea and to start and develop international artistic collaborations.
The outcomes of this project have been shown within Teatro Contatto's season of work and within other partner's theatres and festivals.  It has also been documented in the publication Adriatico. Manuale per un viaggio teatrale nei Balcani / Adriatico - a manual on a theatre journey through the Balkans by Andrea Porcheddu, 2000

The Community Theatre School was set up with the support of CSS and in collaboration with the Department and Mental Health of Udine, as a result of a theatre residency with Alessandro Berti and Michela Lucenti of the group L'Impasto, that took place in Udine in 2004.  The School is housed at the Teatrino di Sant’Osvaldo, within one of the buildings that used to be Udine’s psychiatric hospital. It offers a radically alternative training in theatre, music and movement and is taught by artists who, both in their thinking and practice use technical rigour and inspiration, poetic qualities and social commitment.

During InnovAction 2008, CSS was the first theatre to be officially admitted by the Committee of the Coordination of the Centres for national and international research of Friuli Venezia Giulia to be part of their network.
Established in 2004, the Coordinamento comprises national and international research Bodies which have their headquarters or operational facilities in the AREA Science Park in Friuli Venezia Giulia.  Their task is to coordinate the work of around 40 centres of research which are members of the Network. The Coordinamento promotes science and technology and encourages international collaborations, in particular supporting emerging countries.  The main objective of the Network is to set up an “International House” for the reception of, training and cultural exchange between, established  scientists and young researchers in order to expand the international mobility within the scientific sector, to capitalize on human resources, support new research projects, promote technical-scientific dissemination and strengthen the link between the social-economic, scientific and industrial realities existing in the territory.